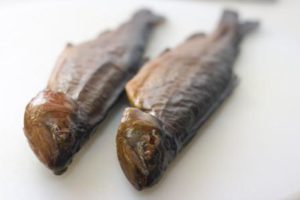 I have been doing many things recently that I have not done before. I recently de-boned a chicken, which I was pretty apprehensive about because it was new to me, but I am pleased to confirm it couldn’t have gone better. This recipe is another example of trying to do something I was thoroughly convinced was complicated and time consuming.  I had never previously bought a whole fish and so I bought two strikingly golden smoked trout from the farmers’ market. I wanted something light and filling and so I made a potato salad where the dressing (I suppose you’d call it) was more trout orientated.

You will need (for one large bowl of salad):

I got home and I unwrapped the trout. I looked at it somewhat diffidently and with remarkable concentration. I lopped the heads off and was relieved that it was at least half complete. How do I take the skin off? By now there was a faint glisten of moisture about my brow. Due to its being gutted my life was made awfully easy. I took the bottom fin and gave it a pull. It was like peeling an orange.

I can’t tell you how simple it was. What I thought would be a right kerfuffle turned out to be one of the most satisfying things I’ve ever done. Once the skin was off, the meat just fell off the bone and I was left with a pile of meat and a complete pile of bones. There were a few strays that I found amidst the pile but I got the blighters.

During my adventures with the trout, a pan full of potatoes had been merrily bubbling away in the background. Once cooked they were drained and left to cool while the dressing was made.  read more

What a strange time of year. As a newbie to vegetable gardening and being too distracted by pride with what had been successful, I missed the band wagon and subsequently planted nothing else this year. Curses. All was not lost! A friend of mine with superfluous plums was kind enough to give us a bag full. What to do with that many plums…I consulted my various books and found a recipe I had written out by hand. I’ve no idea where it came from originally but what a recipe it was; Plum Bakewell Tart. read more 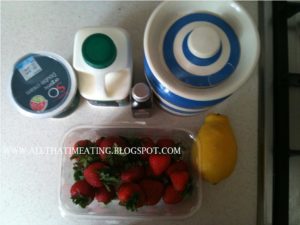 It has been such a busy time recently. As you may note, not even a tiny snippet of bloggage crossed my keyboard in the whole of July. Not for lack of wanting to but for a lack of time! During the hectic haphazardry that ensued I did manage to whip up a few culinary delights. And so to begin… Strawberry Ice Cream.