What a strange time of year. As a newbie to vegetable gardening and being too distracted by pride with what had been successful, I missed the band wagon and subsequently planted nothing else this year. Curses. All was not lost! A friend of mine with superfluous plums was kind enough to give us a bag full. What to do with that many plums…I consulted my various books and found a recipe I had written out by hand. I’ve no idea where it came from originally but what a recipe it was; Plum Bakewell Tart. 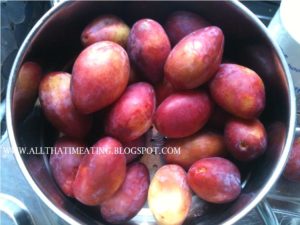 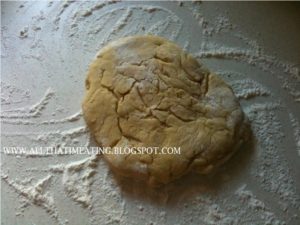 First and foremost I made the pastry. I have a history of failure with pastry. Stupid stuff but I persevered. Practice makes perfect after all.

Sieve flour and icing sugar together and then rub the cold butter into the flour and sugar until it looks like breadcrumbs. Then mix in the lemon zest.

Beat the eggs and then add them along with the milk to the dry mixture to bring it together. Put it in cling film and then refrigerate for at least half an hour. 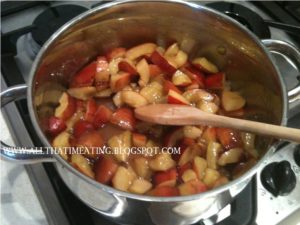 Grease a nice big loose bottomed cake tin. Extract the pastry from the fridge and line the tin with it. This process pretty much always makes beads of sweat form on my brow. It is a tense time in the kitchen if I am lining pastry. I’m frowning a little bit now even.
Anyway. To make the frangipane. Blitz the blanched almonds until you get a fine powder and then mix this with the flour. Try your best to get the seeds out of the vanilla pod and mix those in a mixer with the butter and sugar until creamy. Put the almonds and flour into the mixer with the eggs until smooth. Refrigerate this mixture for at least half an hour.
Preheat the oven to 180C/350F/gas 4. 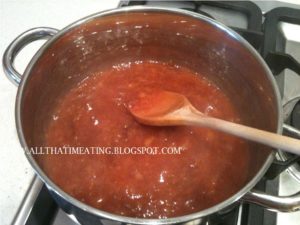 Jam time. To make the plum jam to line the bottom of the tart give yourself longer than you might think. It’s not a quick process. The before and after are both above. Halve the plums and remove the stones. Chop half up and heat in a pan with the sugar and mixed spice. Cook until it looks like jam and then add the cornflour and water.
While you’re waiting…and waiting…for this to thicken, macerate the other half of the plums with some icing sugar. 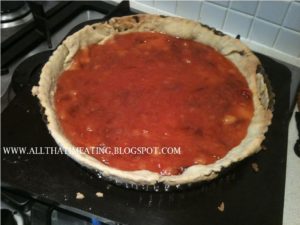 Let us ignore and gloss over the holes in the pastry case and concentrate on the pretty jam that’s covering the bottom. Thank goodness the jam isn’t transparent. Then spoon over the frangipane mixture and push the left over plums into the fluffy frangipane. 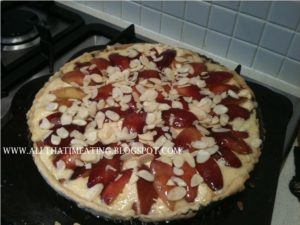 Sprinkle the flaked almonds over the top and then into the oven for an hour. Before (above) turns into after (below). 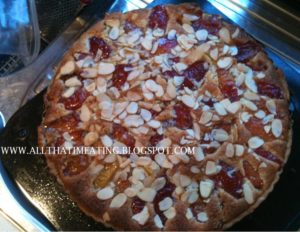 It was massive. It was yummy. It went in less than 24 hours. And it got rid of all those plums.

« Carrot Cake
Pea and Lettuce Soup – a farewell to Summer »