There were two things I discovered I loved when I was in Italy. The first was nduja (if it was on a menu, I was having it) and the second was broccoli on pizza. It seemed, to me, a very good idea to combine the two in a nduja and broccoli pizza. With cooler evenings starting now a seriously spicy, warming pizza made from my favourite ingredients is my idea of the perfect dinner.

Nduja is a Sicilian spreadable salami with an unbelievable amount of chilli in. It almost glows red when you see it. As the nduja is used in the sauce here, rather than as a topping, it gives a warmth and depth of flavour to the whole pizza. The creamy mozzarella does quieten the powerful nduja down a little and the freshness of the broccoli finishes everything off so well. Served with a fresh salad I think this is one of the finest pizzas I have ever made. This is enough pizza for four but we eat it between two. Because we’re greedy. read more 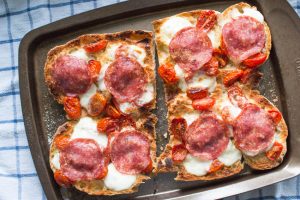 Sometimes there’s nothing better than a sandwich. It could be a properly crusty, thickly sliced loaf filled with simple cheese and chutney, a bagel filled with pastrami, gherkins and mustard or some thin rye bread topped with smoked fish and herbs. I don’t think I could ever tire of something that you can just grab and eat with your hands. My salami and mozzarella open ciabatta is just the thing for a simple, no fuss, full of flavour dinner. Don’t tell anyone but I could have eaten all four pieces to myself.

You will need (for two big sandwiches or four smaller ones):

Start by baking the ciabatta according to packet instructions. Leave to cool before slicing in half lengthways and opening the ciabatta up, then slice it in half again so you end up with four equal sized pieces.

Turn the oven to 220C and put the tomatoes in a single layer in a baking dish. Drizzle over the olive oil and balsamic vinegar, add the vinegar to suit your taste, and then season.

Bake for 20 minutes or until the tomatoes are starting to brown at the edges.

Preheat a grill to medium.

Rub the garlic clove, cut side down, over each open face of the ciabatta. Drizzle some extra virgin olive oil over the ciabatta and then place under the grill for a few minutes until lightly toasted.

Remove the ciabatta and then load each slice up with the tomatoes, salami and mozzarella. Put back under the grill until the salami has crisped up a little but be careful not to let the ciabatta catch.

Unintentionally this reminded me of a pizza and actually, considering how easy it is to make I would definitely try it again instead of a pizza! I love this combination of flavours; sharp and sweet tomatoes, creamy mozzarella and punchy salami. There are so many variations of this that you could make. One I would really like to try would be some leftover griddled aubergine, goat’s cheese and pesto. Or maybe one with figs, blue cheese and honey. Or maybe… 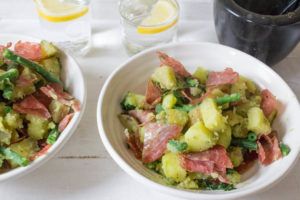 Meals that are made from a few simple ingredients are invariably some of my favourite dishes of all. A quick scramble around the cupboards and fridge pulling ingredients and ideas together always feels more satisfying; like you’re getting a meal for nothing. My evening meals are always planned in advance so it’s lunchtime where I get my Ready Steady Cook hat on. Sometimes however the scrabbling approach doesn’t yield any particularly tasty sounding results; ham and chocolate spread tostadas anyone? This time however, the combination of ingredients I had resulted in Wild Garlic and Crispy Fried Salami Potato Salad and it was brilliant.

Start by putting the potatoes into a large pan of salted water. Bring the pan to the boil and cook the potatoes until they are cooked through, cooking time depends on how big you have chopped them. If you have a steamer add the green beans to the steamer over the potatoes for the last few minutes of cooking, or boil separately for a few minutes.

While the potatoes are cooking put the wild garlic (after a thorough rinse) into a pestle and mortar with a pinch of salt. Bash everything up together well until you have a thick paste then add the olive oil, a pinch of pepper and the lemon juice.

Get a frying pan on a medium/high heat and add the salami. Dry fry until crispy, plenty of oil will come out of the salami.

Drain the potatoes when they are cooked (and the green beans if you have cooked them separately) and mix with the beans, salami and wild garlic oil.

The grassy and faint garlic whiff from the wild garlic is so good with the slightly fatty salami. The fennel in the salami works really well but any salami would be delicious; it’s a different flavour to something like bacon. The potato breaks down after it’s cooked so the wild garlic oil nestles in the little nooks and crannies and turns everything a wonderful green. The beans add a little freshness and the lemon finishes it off with its zesty acidity. A meal as good as this from a few leftover ingredients and a bit of a rummage in the hedgerows; perfection. Something else equally as potato filled and garlicky are my wild garlic gnocchi if you fancy trying something veggie!!
If you want to have a go foraging for wild food, take a look at my beginner’s guide.

Does it get much better than homemade pizza? If you can get the base crispy enough that is. I have been working on my dough and tomato sauce recipe for some time and I think I have finally cracked it. I make the dough fresh then divide it up and freeze in individual bags so I can have pizza whenever. The tomato sauce is made from obscenely ripe tomatoes for richness and sweetness. Caramelised fennel and salami pizza is the best pizza topping I have tried so far! read more