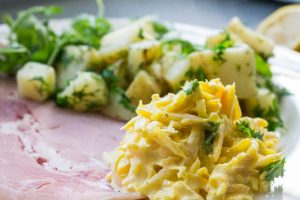 Beetroot has to be one of my favourite root vegetables. I love all the different colours you can get and a recent addition to my veg box was a bunch of golden beetroot. At first I thought about boiling it and mixing it with white wine vinegar and some spices. Then I got to thinking about proper comfort food and a golden beetroot remoulade would be the perfect finishing touch to a rather traditional dinner. A fantastically earthy alternative to using celeriac.

You will need (for a good bowlful of remoulade, enough for dinner and leftovers for the next day): read more

When I make pizza there are no shortcuts. Making it all from scratch from fresh ingredients does take a little longer but it is so worth it, and, good news, batch cooking pizzas is so easy and they freeze really well. Most of the pizza preparation time is waiting for the dough to prove or the sauce to reduce so you can mostly leave it to itself and then reap the rewards in the weeks to come. Coming home and knowing that dinner will be ready in 20 minutes is even better when you know it’s a fantastic homemade pizza. read more

I absolutely love peas. For me, a life without peas isn’t worth living. I moved house late last year and I don’t have a freezer; no more emergency frozen peas for me. Happily it’s pea season now so lovely fresh peas are popping up in the veg box, at the farmers’ market and in the garden. If there’s one thing I like even more than peas it’s mushy peas. So for a deliciously easy summer dinner my mushy peas potatoes and ham is perfect.You will need:

Start by podding the peas. This is one of my favourite kitchen jobs, no sarcasm. read more

When I was in Bruges last year there were a few foods that cropped up on almost all of the menus: moules, frites, waffles and croques. There was one café which we went to more than once because their croques (monsieur, madame and various takes on these) were so good. It was something like €8 for one croque and salad but €10 for two croques and salad; a no brainer really. One of the croques they served was full of ham, cheese and tomato then served with a gargantuan amount of bolognaise on the top. Very handy when you want to be full for an afternoon of taking in the culture, or more accurately, beer tasting. Apparently.

You will need (per croque):

Preheat a grill and toast the bread. Spread a nice thick layer of cream cheese on one slice.

Put the Emmental on the other slice.

Top the cream cheese with the ham then the tomatoes and place both slices under the grill.

Keep the toast under the grill until the tomatoes are hot and the cheese has melted and started to bubble.

Stick the slices together, cut up and serve.

If you have a sandwich toaster you can of course use that but sadly I don’t have one of these handy contraptions. A Corby trouser press would work equally well. read more

When I go out and there is a charcuterie board on offer I struggle to turn it down. I find cured meat fascinating and it’s one of my absolute favourite indulgences. One of my top five would have to be Iberico ham. I can’t get enough of it although my waist and bank balance would probably encourage me to eat a bit less. I like to make an expensive ingredient go as far as possible so this Spanish inspired potato salad is an attempt to do exactly that.

More and more I am cooking Spanish food and dishes. It’s a cuisine I have dabbled in while dining out but not one that I am terribly experienced in; I’ve made a few paellas and tapas in my time but I’d like to delve deeper and cook some more unusual meals in the future. This dinner was a bit of a hodge podge mix of ingredients but it worked wonderfully well.

This is a throw it together really simple recipe. Put the potatoes into cold salted water and bring the potatoes to the boil. When the potatoes are almost cooked, add the beans into the same water for the last 2 or 3 minutes of cooking. In the meantime mix together three parts oil to one part vinegar (make extra if you have some spare bread to dip in afterwards) then crush the garlic clove in and add the salt and pepper. When the potatoes and beans are cooked, drain them and pour the dressing over to warm through. Serve up and top with the Iberico ham.

It’s such a simple meal but it delivers so much flavour. Earthy potatoes, sweet beans, sharp dressing and creamy Iberico ham make each mouthful different in flavour and texture. It took around fifteen minutes from start to finish and with a nice glass of wine makes a delicious, quick Friday night dinner. Well with a bit of imagination you could be on the Andalucian coast. read more

I had been waiting and waiting until the asparagus turned up at the Farmers’ Market and last weekend it finally did. I had heard whispers and rumours that this fine vegetable had pushed its purple head through the soil but didn’t want to get my hopes up until I saw it with my own eyes. read more