When I make pizza there are no shortcuts. Making it all from scratch from fresh ingredients does take a little longer but it is so worth it, and, good news, batch cooking pizzas is so easy and they freeze really well. Most of the pizza preparation time is waiting for the dough to prove or the sauce to reduce so you can mostly leave it to itself and then reap the rewards in the weeks to come. Coming home and knowing that dinner will be ready in 20 minutes is even better when you know it’s a fantastic homemade pizza. 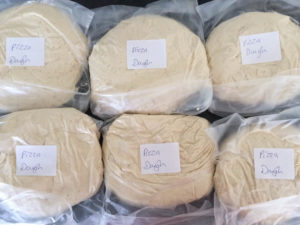 For the pizza dough:

For the tomato sauce:

Toppings of your choice 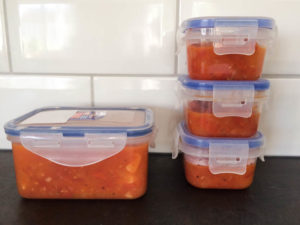 Part of the reason this is so easy is because I chuck everything into my mixer and leave it to do the hard work for me, but, if you’re so inclined you can make it by hand.

Put all of the dough ingredients, apart from the water, into the mixer bowl and give everything a quick stir together. Get the mixer on a low speed and slowly add the water. Keep mixing until combined then increase the speed to knead the dough for five minutes.

Leave the dough in the bowl covered with a damp tea towel and put aside for an hour until risen.

While you are waiting for the dough start making the tomato sauce. Add the onion and a splash of oil to a saucepan on a low heat and leave the onion to soften, stirring from time to time, for 15 minutes.

Chop the tomatoes roughly and remove as many seeds as you can, don’t worry if a few slip through.

Add the garlic to the pan and leave to cook for a few minutes then tip in the tomatoes. Stir everything together well then leave the pan, lid partly on, to simmer for half an hour. Stir occasionally.

Once the sauce has reduced by about a third, add the salt, pepper and basil and then leave the lid off for the sauce to cool.

Turn the pizza dough out onto a floured surface and knock it back. Divide into six or eight, depending on how big you would like your finished pizzas.

Put the dough into freezer bags and divide the tomato sauce up into bags or pots too and pop into the freezer.

I always leave some dough and sauce out so I can make a pizza straight away; it smells too good not to.

Roll the pizza dough out on a floured surface until it’s the right size for your baking tray. Square, rectangle, round, they all taste the same!

Put the dough onto the baking tray, spread over the tomato sauce and then add your toppings. My most recent topping was mozzarella, speck and mushrooms and you can add whatever you like.

Put the pizza on a high shelf in the oven for 8-10 minutes until the edges are golden and the cheese is bubbling. 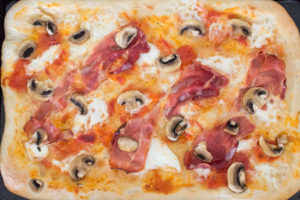 I made this most recent batch of tomato sauce using red and orange tomatoes; the orange ones added such a sweetness to the sauce and the red ones a real depth of flavour. This tomato sauce also makes excellent sauce for pasta too and I’ve used it for Bolognese in the past. Proper homemade pizzas do take some beating, I love that I know exactly what’s in them and you can add as much or as little of the toppings as you like. The dough is best defrosted in the fridge the morning before you want to eat it in the evening and once the dough and sauce are done it takes no time at all to throw it together.