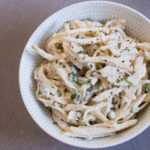 I used to really dislike horseradish, I just didn’t understand why you would want to eat something that makes you pull a face similar to the one you would pull if someone trod on your foot. I had tried it before and had decided to avoid it at all costs from then on; until I ate some by accident in a mini Yorkshire pudding covered with rare roast beef and everything changed. If you’re like me and you’re also on Team Horseradish then you must END_OF_DOCUMENT_TOKEN_TO_BE_REPLACED 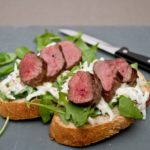 I don't wish to be cruel but a celeriac is never going to win the most attractive vegetable of the year award. To make up for its less than enticing characteristics you would have thought Mother Nature would make it easy to get inside, peel it like an orange for example, but the skin of a celeriac is as tough as old boots. That's not to say it's not worth the effort, the hand cramp and the awkwardness; it's a great root to take some frustration END_OF_DOCUMENT_TOKEN_TO_BE_REPLACED

This website uses cookies to improve your experience while you navigate through the website. Out of these, the cookies that are categorized as necessary are stored on your browser as they are essential for the working of basic functionalities of the website. We also use third-party cookies that help us analyze and understand how you use this website. These cookies will be stored in your browser only with your consent. You also have the option to opt-out of these cookies. But opting out of some of these cookies may affect your browsing experience.
Necessary Always Enabled

Any cookies that may not be particularly necessary for the website to function and is used specifically to collect user personal data via analytics, ads, other embedded contents are termed as non-necessary cookies. It is mandatory to procure user consent prior to running these cookies on your website.