I don’t like to be rude but sometimes a cucumber can be a pain in the backside. What do you DO with it? Yes it’s very nice quartered and added to a salad; occasionally I go somewhat exotic and fork the edges of the cucumber before adding it, it’s terribly exciting. I have wanted to try a chilled cucumber soup and also thin slices with a little salt, sugar and sherry vinegar but every so often I find myself simply wanting to use the cucumber for jousting. You may wonder why, if I have so many qualms with the cucumber, I keep on finding them in my fridge. When you get a vegetable box delivered it is inevitable that you will end up with things you always prepare the same way. Not anymore, my culinary cucumber monotony needed to be broken. 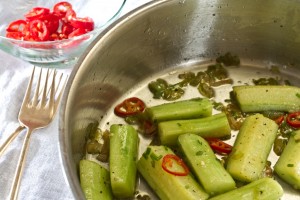 You will need (for two as a side): 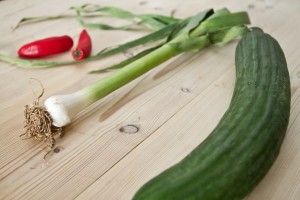 Peel the cucumber and then cut into sticks; I got 12 sticks from mine. Melt a big knob of butter in a pan on a medium heat and add the cucumber. While the cucumber softens slice the wet garlic thinly and then add this to the pan with the cucumber.

Keep stirring everything in the pan until the cucumber and garlic are starting to brown; the cucumber is surprisingly strong and doesn’t break down.

While you’re waiting slice the chillies and chop up the chives. For the final minute or so of cooking add a few of the chillies, the chives and some salt and pepper. Remove from the heat and serve with the remaining raw chillies. 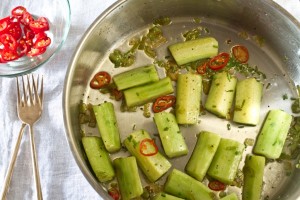 I have to admit that I was a bit sceptical about this recipe; these were the things I had in my fridge and I was hoping that they would go pleasingly well together. There were some pretty apprehensive looks passing across the table as we ate the first pieces but actually this was a bit of a revelation. The cucumbers retained a lot of crunch and juice but were soft and squishy at the same time. The wet garlic and chives added an onion background that worked well with the heat of the chillies. A hot cucumber is something that will be gracing my table again.

« Grow Your Own Tomatoes with Heinz and a few other garden developments
Steak, Chips and Mushrooms with Maille Pepper Sauce »