This is almost the meal that changed my life: broad beans and feta. Until a few years ago I considered any food that wasn’t plain boiled pasta disgusting. I was completely disinterested in anything that wasn’t beige and flavourless. I went to University and had to start fending for myself so a few more exciting things crept into my culinary repertoire; a little melted butter on my pasta for example. I know, exotic. 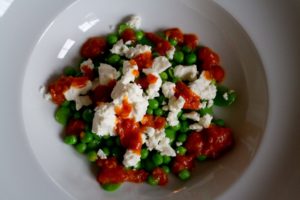 I suppose I was what you would call a late flavour bloomer; I think my olfactorary centre and taste buds started to develop with my wisdom teeth. Indeed not only had I grown some physical wisdom I also had some previous culinary knowledge on which to build, and now, more teeth to eat things with. I have always cooked; biscuits with my Granny, cakes and pastry with my Mum and barbeques with my Dad but it wasn’t until 2008 that I really started to experiment. 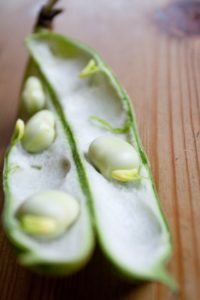 At University you become extremely good at procrastination. One of my favourite time wasters was trawling the internet looking for cookbooks. For someone who found flavour offensive I had a pretty large collection of cookery books; I found great pleasure in cooking for others things that I wouldn’t touch with a bargepole. I came across a particular cookery book that sounded pretty good to me; it was over 500 pages long which is a lot of bedtime reading. I ordered it.
What I didn’t know when I ordered it was that it was a book about vegetables; pages and pages of green, red, orange and purple things which were all alien to me but they were organised alphabetically so I liked that. There was one particular recipe that caught my eye, mostly because it seemed cheap. It was green beans with roasted tomatoes. I made it and the textures and flavours were like nothing I’d ever had; the beans were still slightly crunchy and squeaked when you chewed them, the tomatoes were sweet but also acidic. I probably ate more beans at that moment that I had ever eaten cumulatively in my life before. 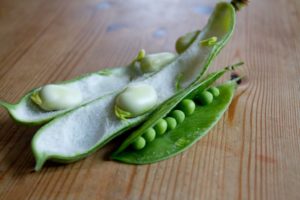 It’s now four years later and I have a vegetable patch. I get more excited about the prospect of the Jerusalem artichoke season than most people would think healthy. I am constantly on the search for new fruits and vegetables like a botanical Christopher Columbus. My parents were at their wits’ end when I was growing up but they always encouraged me to try new things. They said I’d thank them one day; I can’t thank them enough.

Here is a slightly spruced up version of that meal which encompasses some of my favourite vegetables of all. A light lunch for two: 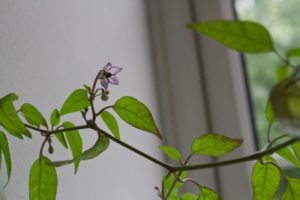 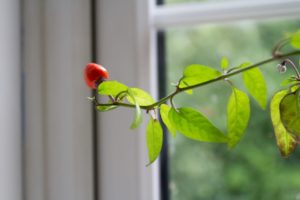 As you may have seen from the photos above I have grown my own chilli for this recipe. I believe the variety is ‘Violent in Violet’ however I may have invented that name from nowhere so don’t quote me on it! This is the only chilli I had this year, I’m still hoping for another but I won’t hold my breath.

Slice the tomatoes in half, put in a baking tray and then drizzle with olive oil, white wine vinegar and salt and pepper. Put these into then oven at 220C for 15-20 minutes or until slightly blackened at the edges.

While the tomatoes cook remove the broad beans from their pods and the peas from theirs.

Cook the broad beans and peas in a little salted boiling water for 2-3 minutes. When done, drain them and squeeze the broad beans out of their grey skins. The easiest way to do this is to make a little slit in the side of the case with your fingernail and then squeeze it out.

When the tomatoes are done put them into a blender with the chilli and blitz into a chunky sauce. Put the peas, broad beans and sauce onto a plate and crumble the feta cheese on top. 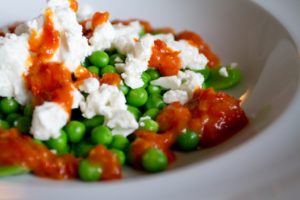 This was lovely because the spicy tomato sauce and cheese sort of melted in to each other and the beans and peas were wonderfully sweet and crunchy. If you’ve been reading this blog for a while or if you’ve just started you might have noticed that my food revolves around fruit and vegetables. I can’t imagine a life without fruits, vegetables and the seasons that bring them. Things have certainly progressed in four years but I do always wonder what would have happened if I hadn’t ordered that book.