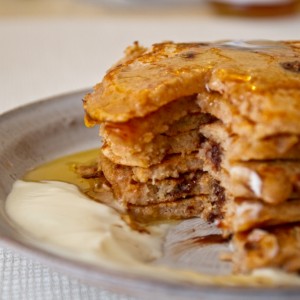 When the weather gets like this there is only one way to improve the situation; to fill your belly with buttery things. More specifically spelt and chocolate pancakes. It seems to have been raining forever recently! Each time I glance out of the window there is never even a peep of blue sky and hardly any bright daffodils to remind me it is in fact Spring. But no matter, I have honey at the ready.  Perhaps not the healthiest advice to give, a more svelte person might suggest a nice jog in the park but it wouldn’t quite cut the mustard for me. No, when my fingers are still blue in March I need chocolate and sticky sweet things. That’s where these Spelt and Dark Chocolate Pancakes fit in nicely. Rachel’s Organic sent me some Greek Yoghurt with Honey to try and I thought it would work nicely with these pancakes.

You will need (for around 16 pancakes):

Start by sieving the flour, baking powder and sugar into a large bowl.

In a separate bowl mix together the melted butter, egg and milk until well combined. Stir the egg mixture into the flour mixture and add the chocolate chips. Give everything a good stir to make sure it is well incorporated.

Heat a little knob of butter in a frying pan until it just starts to foam and then drop the pancake mixture in using around 2 tbsp of the batter for each pancake.

Fry the pancakes until they are golden brown before flipping them over and cooking the other side. Don’t be tempted to flip too early as you could end up with miserable looking pancake. read more

I like books. I can rarely walk past a charity or second hand book shop without having a little nose around. My affection for literature is not just for old books, I love the smell of new ones.  As a result of my fondness, and subsequent collection of books, it was about time I sorted a few out in order to prevent some sort of hardback avalanche occurring. So that I didn’t get bored I thought it was a good idea to intersperse the organising with some biscuit making. I had bought some spelt flour a while ago to make some soda bread and there was a recipe on the back for these biscuits. They sounded ridiculously quick and simple and I thought it would be rude not to give them a try.

These are some of the easiest biscuits I have ever made; mix everything together, put on a baking tray and bake for only 8-12 minutes.

In amongst all the book sorting, biscuit mixing and desperation in trying to remember to remove all dough from my hands before it ended up on my books I have a few tips to pass on.

Firstly, if you weigh the oil out first and then weigh the honey on top of the oil it will all slide out together and you won’t be stuck scraping honey out of your measuring bowl. Secondly these biscuits grow quite like no other; at least doubling in size so leave plenty of room. Lastly they need at least 12 minutes baking, mine took about 15 minutes in total but that may have been because they were large. read more