Although not my favourite meat you can’t very well ignore a turkey at this time of year. I’m not going to be cooking a whole turkey (there’s only two of us!) so instead, to make a nod to this festive bird, I made these spiced turkey meatballs. They are great with the chillied cranberry sauce. This recipe does have a whiff of a turkey curry about it but it’s an ideal dish to make for party finger food. 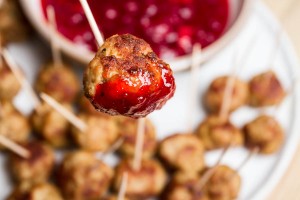 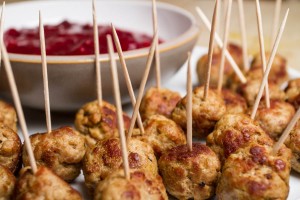 Mix the garam masala into the turkey mince until well distributed and well mixed together. Form into mini meatballs then cover and refrigerate until needed.

Put the water and sugar into a pan and heat slowly until the sugar dissolves. Add the cranberries and chilli and simmer, stirring occasionally, for 15-20 minutes or until thickened and the cranberries have burst.
Put the sauce to one side to cool.

Remove the meatballs from the fridge. Get a large frying pan on a medium heat and all a little oil. Add the meatballs and fry for 10-15 minutes or until golden brown and cooked through.

Serve the meatballs with cocktail sticks and the cranberry sauce. 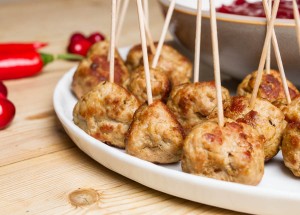 I used the thigh meat for this recipe as it’s cheaper than the breast meat and not as dry. It’s a very satisfying thing to make; I quite like meals that involve rolling. It’s also nice to listen to the cranberries as they pop and burst making their own sauce. As an alternative you could try making some onion and cranberry chutney. Turkey and cranberry are age old companions but this new way of serving it up turns that well known flavour combination on its head. Golden and sticky on the outside with a faint curry flavour and distinct turkey taste they are great on their own. Once dipped in the sweet chillied cranberry sauce it’s like an old friend with a new haircut.