Oh rhubarb. Not only the choice swear word for the less potty mouthed among us but also a rather delectable vegetable. I know it’s sort of a fruit but as it doesn’t have any seeds I will class it as a vegetable. I acquired my most recent handful of stalks after spending a lovely morning at a local farm shop (more about that in a separate post). I was even allowed to pull this straight out of the ground myself which was a rewarding, if somewhat exhausting, activity. 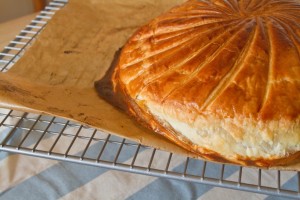 I have wanted to attempt this classic French ‘King of Tarts’ for so long; the rhubarb seemed like a perfect addition. I have made many frangipanes in the past so just halved what I would normally put in my large fluted tart tin for this recipe.

You will need (for one finished galette des rois): 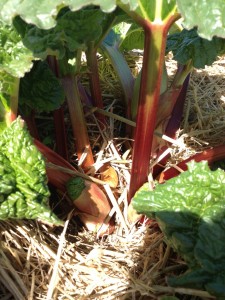 Preheat the oven to 180C and put the rhubarb onto a baking tray in a single layer. Sprinkle over the demerara sugar and then toss the rhubarb in the sugar so it all gets nicely coated. Put this in the oven for 15 minutes to roast. When it’s done the rhubarb should have softened but retained its shape and be gently caramelised. Put the rhubarb to one side to cool. Leave the oven on after you remove the rhubarb as you’ll need it at 180C to bake the tart.

In the meantime cut out two circles of pastry (using plates as templates), one slightly larger than the other and then put them into the fridge while you get on with the next bit.

To make the frangipane beat together the butter and sugar until smooth and then mix in the almonds and egg. Once the rhubarb is cool line a baking sheet with some greaseproof paper.

Remove the pastry discs from the fridge and place the smaller circle on the greaseproof. Smooth over half of the frangipane leaving a 1-2cm gap around the edge. Arrange the rhubarb pieces on top and then cover the rhubarb with the remaining frangipane. Brush the edge of the pastry disc with the milk and egg mixture then carefully put the larger pastry disc on top.

Press the top and bottom pastry circles together then brush the whole pastry with some more milk and egg mix. Using a sharp knife score the top of the tart in whatever pattern you wish.

Put this into the oven for around 30 minutes until risen and golden brown. Remove and leave to cool a little before serving. 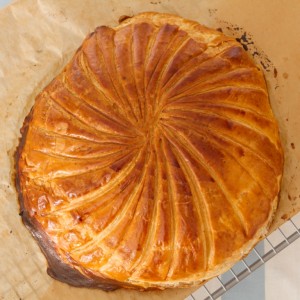 I have to say that this has to be one of my all-time favourite uses for rhubarb. And pastry for that matter. This is crisp, gooey, sweet, flavourful and faultless. I just can’t imagine what else you could need in a tart. I have a deep affection for rhubarb as it symbolises so much at what can be an otherwise drab time of year. The tart, caramelised rhubarb layer in this tart was a wonderful addition. This is traditionally a more festive tart but it was so good I can see it being a more regular rhubarb repast.

« Grow Your Own Tomatoes with Heinz
Cobbs Farm Shop »