The Cornish pasty is an absolute classic. If you’re ever in Cornwall you won’t be far from one, you’ll probably smell it before you see it. Originally from humble origins the pasty is now a celebrated meat and vegetable filled pastry. For those who don’t know the pasty was the food of Cornish miners. The way it is folded over (with a thick edge of pastry on one side) meant that the miners didn’t have to put their hands in their mouths when eating. It’s a clever bit of pastry this and it got even cleverer when you had a savoury and sweet end separated by a wall of pastry. Meat and vegetables in one end and fruit or jam in the other. If I had one of these for my lunch I’d consider it pretty luxurious. 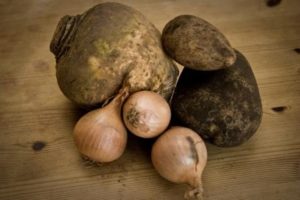 Before the pasty police come out in force and criticise my ingredients or method, I think it’s important to point out that I am not Cornish. However, my better half is half Cornish and his Grandmother a full on Kernow woman and she has passed on some of her pasty knowledge. 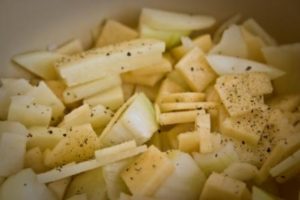 Making pasties is quite personal; only you know what proportions of vegetables and meat you like, how full you want your pasty to be and how big. Because of this I can provide a guide but you can change proportions at will. To make four large pasties I used: one large and one medium potato, half a swede, three small onions and 500g of skirt steak. For the pastry I used 400g of plain flour, 200g butter and enough cold water to make a dough. 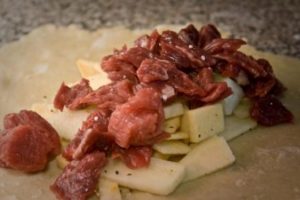 First make the pastry by mixing the butter into the flour until you get fine breadcrumbs. For once I did this by hand, not in the blender, and was surprised at my own success. Add a pinch of salt and enough cold water to the breadcrumbs to make a dough then chill in the fridge while you prepare the vegetables. Peel and finely dice all the vegetables; I recommend something good on the radio to keep you company as it will take some time. Put them into a bowl and mix in a good helping of salt and pepper. 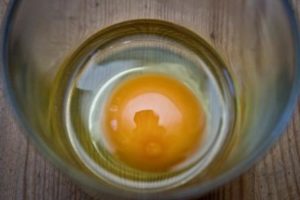 Skirt steak is something I had previously found hard to get hold of. I once attempted to purchase it in the Summer months and was abruptly told that skirt was not available at that time of year. I asked where all the skirt had gone; how could all of them simply disappear? I was told that cattle don’t have skirts in the Summer. I didn’t know if she was joking or not. If and when you do get hold of some it is a beautiful cut of meat, hardly any sinew or fat. Dice the skirt up in similar sized pieces as the vegetables. 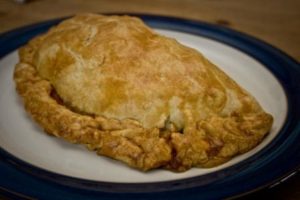 To assemble your pasty you need to divide the pastry into four and then roll each piece out to the size of a plate. Put a quarter of the vegetable mix into the middle of the pasty, top with the skirt, season again and then put a knob of butter on top. Fold the pastry over sealing the edge with a little water or egg. I’m not a good crimper so I didn’t try very hard but crimp the edge of the pastry as best you can.
Brush each pasty with some egg before putting into the oven at 180C for around fifty minutes or until the pastry is lovely and golden brown. 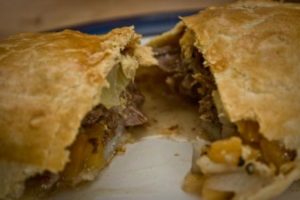 Some like to have baked beans with their pasty, others like to have pickle. I like it just as it is; tender juicy meat and succulent soft vegetables all surrounded by crisp, buttery pastry. A homemade pasty straight from the oven is a wonderful thing; the smell that fills the house while it bakes makes the anticipation almost unbearable. This classic British dish is definitely worth the wait.