Roast potatoes are important in any roast dinner. Sometimes I find I can pay them a bit too much attention and end up spending less time on the other vegetables. This dauphinoise recipe is a great way to use some swede to make a great side dish and also incorporates potatoes so you can do a two in one. Not to be greedy but there’s no reason you couldn’t have this and roast potatoes for a roast! 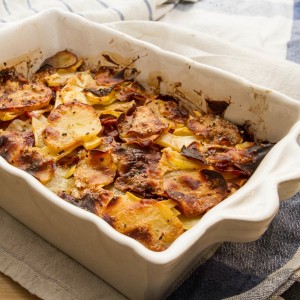 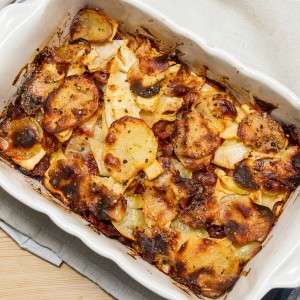 Fry the bacon in a little oil until crispy then set to one side.

Layer up the potatoes, swede, garlic, bacon, and add a little salt and pepper to each layer, finishing with a layer of potatoes and swede in an ovenproof dish.

Pour the double cream over the veg then dot the top with butter.

Place into an oven at 170C for 1 and 1/4 hours or until soft through when tested with a knife.

If you find it’s browning too quickly cover the dish with some foil before returning to the oven. 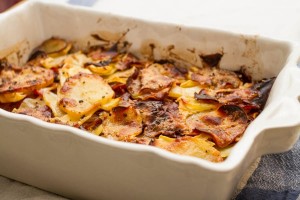 It was lovely to slice and dive into this. I thought the swede might be a bit overpowering but using it half and half with potato meant you could taste both vegetables equally. The garlic was faint and the bacon added a lovely smoky earthiness. You could use it to accompany anything really but I think it’s very fine on its own.