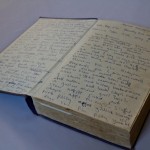 I was given The Glasgow Cookery Book a few months ago; I'm a sucker for an old and worn book and everyone knows it. I put it to one side to have a look at later and forgot about it until more recently. An old book that smells like it should deserves a proper going over and a nice cup of tea. I sat down to enjoy a flick through the aged pages and got a lot more than I bargained for. I was hoping to find an interesting recipe that had perhaps been END_OF_DOCUMENT_TOKEN_TO_BE_REPLACED 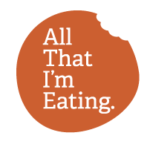 A dear friend of mine bought me a blank recipe book for my birthday 4 years ago. She must have had foreknowledge of what was to come! It is a place for favourite recipes, creating new combinations and exploring ideas. Now, I have probably 4 pages that have not been written on but I'll never buy a new one, I'll just keep adding pages to this one. The book is severely thumbed but I think this makes it look well loved. So where do we all keep our END_OF_DOCUMENT_TOKEN_TO_BE_REPLACED

I bought Tender volume 1 a few weeks ago thinking it looks like a nice big fat book full of interesting recipes. I was so wrong, it is so much more than that. It's one of the best cookery books I own. If there is a vegetable he has not included in some form or other, I can't spot it. I have always thought I don't like certain vegetables, I was so wrong about this too. I now have a new love affair with vegetables and there isn't a single one I would END_OF_DOCUMENT_TOKEN_TO_BE_REPLACED 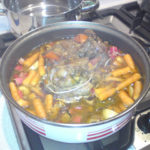 I certainly saw Levi Roots putting music into his food! At the recent show, we were treated to several performances including the Reggae Reggae song! He cooked mackeral with green bananas and ended up putting three scotch bonnet peppers in - at least 100,000 on the Scoville Heat Scale each. I don't think I'll be putting that many in. It filled the room with the smell of the Caribbean - allspice, peppers, garlic. Wanting to try it for myself, I END_OF_DOCUMENT_TOKEN_TO_BE_REPLACED