There’s honey, and then there’s honey. I like all of it but my preference is for local honey. Delicious in so many recipes I wanted to make the honey the star of the dish; so I set about baking a honey cake.

At a market recently I tried some different honeys from a local producer. Not only were they different to each other, and commercial honeys, in colour and texture but the taste was out of this world. I chose the wildflower honey and remembered I had wanted to bake a honey cake for a while. The name ‘honey cake’ conjures up images of fine summer picnics in the garden, tall glasses of lemon barley water and sounds like you imagine it tastes.

Yes, you did read that correctly. What does a bit of old flannel have to do with an excellent cake? It helps it rise evenly so there’s no cracked cake top and a beautiful even finish. I couldn’t quite believe something so simple worked so effectively. Just take an old flannel or towel and cut a strip that fits around the outside of the cake tin. Soak the flannel in water then wrap it around the tin and secure it (I used a safety pin). Then make your cake as normal. The wet flannel keeps the outside of the cake cool as it bakes so the middle of the cake and the edges rise evenly. I added an extra five minutes of baking time than my original estimate to compensate for the cooler mix.

Weighing honey is always a bit of a pain as it is so sticky. However, I have found a way to make things a bit easier. I put the butter wrapper into the bowl on my scales and weigh the butter on top. Then I weigh the honey on top of that. Then when I transfer it to the mixer, holding the four corners of the wrapper, it all slides neatly off into the bowl.

I would like to try this with maple syrup rather than honey; I think the flavour would be fantastic. The warmth of the cinnamon is great and allspice or vanilla would definitely be worth a try. Saffron would be a very welcome addition in this cake; I’d warm the honey and infuse the saffron through it.

I used nasturtiums to decorate my cake; I prefer something simple! Any edible flowers would work or even some fondant bees if you’re so inclined. 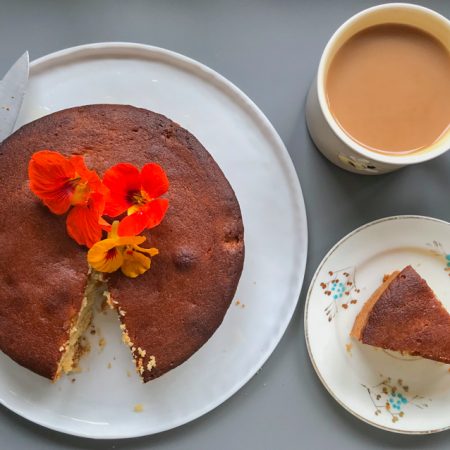 I used a mixer to make this cake but you could use an electric hand whisk, or make it by hand.
Keyword cake, honey