I have been camping a few times with my family, with school and even once in my own back garden. For some reason unbeknown to me I had the grand idea to pack up a load of camping stuff and go hiking through wild Wales. I have never hiked anywhere before unless you count carrying the washing basket upstairs. If you’re considering hiking and camping then this is a tale for you.

I consider my other half and myself to be somewhat sensible people with reasonable general knowledge and survival skills. I mean, we’ve watched Ray Mears a few times and Wales has no poisonous spiders or bears to contend with; how hard can it be? 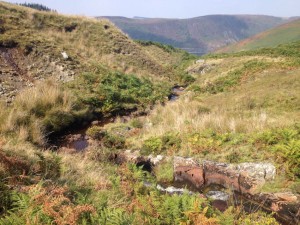 I can confirm that 22 miles in two days over a mountain carrying a huge bag is very hard (I should probably use the preferred term ‘challenging’) but I wanted to challenge myself to see if I could do something I never had before, try something new and pat myself on the back when I did it. Now I’m sure to any of you hiking enthusiasts reading this that my plight doesn’t sound particularly special to you but I can assure you that it was one of the hardest things I have ever done.

We set off full of optimism, map and compass in hand ready for our adventure. There was a plan; a simple one involving following a footpath clearly marked on our map which, as it turned out, wasn’t on the actual floor. It probably was on the ground but it had disappeared beneath the never ending, and somewhat unexpected, bog. So we pointed the compass north west and walked. 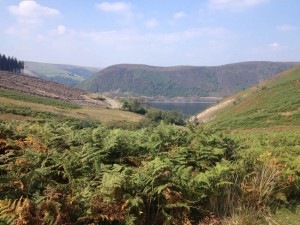 We went over a mountain (I use the term loosely, think very big hill), over the same stream several times, through bog, reeds, ferns, along sheep tracks and not once in five hours did we see another person. Just sheep. Many, many sheep.

I found wild blueberries (bilberries) and cranberries too and we sat, looked and trod in places not many other people have or will. We had lunch overlooking what appeared to be all of Wales with the reservoir in sight on a couple of rocks that probably no one else will enjoy Coronation chicken sandwiches on. The feeling of freedom and independence was immense; we had everything we needed to survive out in the wilderness. For one night at least. 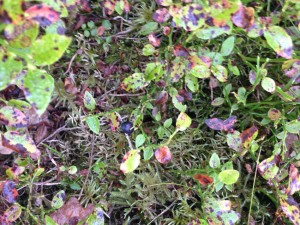 It took almost six hours to reach the campsite, Elan Oaks, and although I’m no campsite expert this one seemed really good! The toilets and showers were so nice and clean, everyone on the campsite was friendly and the location was so pretty. We took some posh pot noodles with us to have for dinner as they don’t weigh much and all we had to do was heat water to make our dinner. Our little petrol burner took no time at all and our petrol powered light made a great hissing noise when in use; huge thanks to Dad for those, they were great.

Tent up (perhaps not 100% correctly), sleeping bags ready and two very happy campers went to bed. The sleeping bag I had was called Everest. I think that’s a great name for a sleeping bag, it conjures up images of its suitability in even the most extreme cold. This thing, honestly, had a tog rating of at least six billion. I could have slept on top of Everest without a tent and been roasty toasty. If anything I was too hot but better that than too cold. 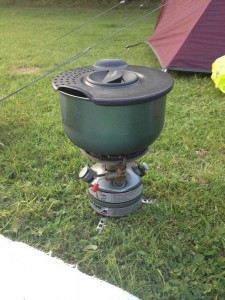 We packed everything up the following morning. It’s very easy to check if you’ve forgotten anything. Is the ground clear? Yes, then you’re good to go. The Elan Valley visitor centre was our first port of call where we stocked up on sandwiches for the journey back.

The hike there had taken its toll on my feet, ankles and legs which were a bit fed up with being twisted every other step and going uphill wasn’t how I’d describe comfortable! The journey back was much harder. We took a different route in the hope of finding the footpath and ended up following a bridleway. We hoped it was a bridleway and began to doubt it until we saw a pile of horse dung. I’ve never been more relieved to see a load of horse poo in my life. It meant we were going the right way which also meant that a comfy chair and a beer weren’t too far away. 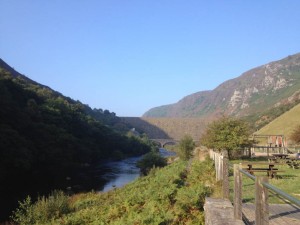 We went past a lake on top of the mountain on the way back but by this point I was too fed up to take a picture. After going over the summit, and its many, many false summits, the end was in sight. Apart from almost being eaten by a horse and having to cut through a farm (apologies to you Mr Farmer) we made it back. After collapsing on the sofa for a considerable amount of time I felt pleased I had done it. For the remainder of the evening my legs decided to behave very peculiarly: I would point them in one direction and they would go off somewhere entirely different. I’m better now though.

If you fancy giving it a go yourself I have a few essential hiking items (other than the obvious) that you may wish to take on your own adventure: blister proof socks, sensible shoes, sweets, lots of food, suntan lotion (even in September), strong legs, willpower and carrier bags. I’m glad I did it, I would do it again but not go as far I don’t think. We survived, didn’t get shouted at by anyone and my legs are now recovered. I’d say a great success.