It’s all about baking at the moment. The Great British Bake Off has taken over our Tuesday evenings and I for one have felt the need to bake more so than usual. National Baking Week starts on Monday (the 14th to 20th October 2013) and Baketopia was a fantastic way to kick it off. The Tattooed Bakers, Nevie Pie Cakes, Caking It, Cake Revolution and Conjurer’s Kitchen are some of the people who contributed to Baketopia which is also supported by John Whaite, winner of GBBO 2012. 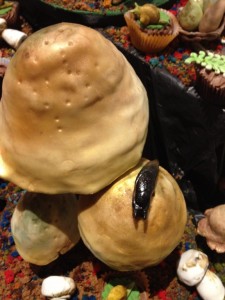 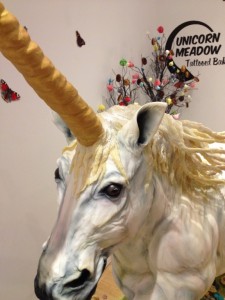 The event is being held in Kingly Court (off Carnaby Street in London) and the last day you can gorge yourself on all manner of sweet treats is 12th October. It is quite a thing to be seen, it’s hard to believe that almost everything is edible. I hope my pictures can get across how realistic some of the bakes were.

Above (clockwise from the top) is the edible meadow; covered in brightly coloured macarons and biscuits. The unicorn was fantastic and it seemed such a shame to cut into it (although it was made of rainbow cake so well worth a slice) and The Tattooed Bakers told me it took around 120 hours to put together. I can’t imagine where I would even start.
I loved the ridiculously realistic looking slug on top of the rather magical looking mushrooms. Even though I know it’s not actually a slug, I wasn’t tempted to try it! The meringue wigwam was so bright and colourful and the pistachio meringue I tried was delicious.

It was great that John Whaite and Ruby Tandoh also came to the event to show their support for National Baking Week and they were both very kind to let me muscle in for a photo! The vegetable patch below was suspiciously realistic but I did try a potato just to make sure it was cake.

I think this is a great event to inspire people to bake. I don’t think I’ll be attempting a cabbage cake because I know it would look more like an accident but I’ve just realised I have at least eggs, butter, flour and sugar which means my possibilities are endless.
All donations made at Baketopia are going to Great Ormond Street Hospital.