You may already know that I went to Bruges earlier this year and for the first time realised that beer is actually rather nice. My affection for beer only really extended to the Belgian kind at first. Not that easy to get hold of the more unusual brands I started venturing into beers unknown. A local pub of ours sells Doombar, which is brewed in Cornwall by Sharp’s Brewery, and I thought this was finally a British beer that I liked. Then I discovered (thanks to a Belgian-ish beer bar in London) that Sharp’s made Belgian style beer in Cornwall. 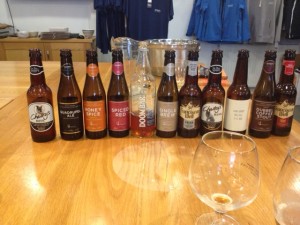 We were planning a trip down to Cornwall anyway so after tasting one of the Connoisseurs beers I asked them if they wouldn’t mind giving us a tour, thinking it would be like some of the other tourist orientated factories. It turns out they don’t actually do tours so it was very kind of them to take the time and effort to show us round. As it happened we were shown around by Stewart Howe who is the head brewer and he has won many awards and accolades for his beers.
It was fascinating. We were able to taste some of the different malts; from the pale and reminiscent of maltesers to the very dark Guinness-esque ones. They were surprisingly chewy and I wouldn’t have minded a handful to snack on! Next we were running our hands through some of the different hops that are used; British, European and American, I was so surprised how different they smelt and the fruitiness of them too.
We got to see inside one of the tanks in action; it was covered in a thick layer of yeasty bubbles and had a great aroma. Sharp’s make such a range of beers and in all sorts of different bottles and barrels and if there’s anything Stuart doesn’t know about beer it’s not worth knowing. 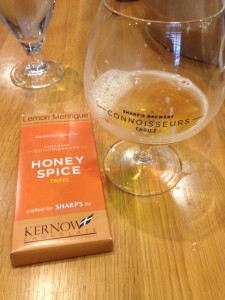 After we had seen the whole process we were able to try some of the bottled beers; 11 in total we tried on our visit. It was similar to wine tasting with the water swishing out in between each one. The photo shows the beers we tried from our favourite (on the left) to the ones less for us (on the right). The range of colour and flavour between them was remarkable; from light and citrusy to deep and honeyed. For someone who used to think all beer tasted the same this was eye opening.
The best bit was when they brought out the chocolate. The two bars of chocolate have been created specially to pair with the Honey Spice beer (white chocolate with lemon meringue) and the Quadrupel (70% dark chocolate). Beer and chocolate I tried in Bruges but it was beer that had the chocolate (or flavour) in it. This was different, not least because the chocolate had other flavours, but because you could make it as strong or faint in chocolate flavour as you liked by nibbling.
One of the more intriguing beers was one called Land Shrimp. I kid you not when I tell you that it was made with woodlice, hence the name. It was quite a bitter beer I thought but I couldn’t tell you if that was down to the woodlice or not. Apparently you can add almost anything to beer! 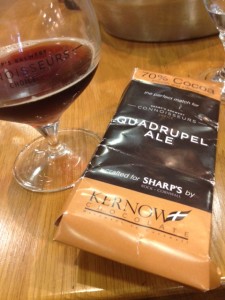 We bought some of the beers home with us; Honey Spice, Spiced Red and Quadrupel. Interestingly they are best drunk between 8-14C so they have the perfect home next to the front door and also act as a useful draft excluder. The quadruple ale uses four types of malt, four types of hops and four types of yeast and takes six months to mature before they can bottle it. That is why the range of Connoisseurs Beers is limited edition. I’m not worried though as they are already brewing up the next new Connoisseur flavour so I’ll be in British Belgian beer for the foreseeable future.
Thank you to Sharp’s for the tour and tasting. All opinions expressed are my own and I was not asked to or paid to write this review.

« A Trip to Cornwall
Gnocchi with Broccoli, Toasted Walnuts and Blue Cheese Sauce »